I feel like it is that time of the year when, at least for me, I start to get  frustrated, complacent and even uninterested with everything. It’s still winter, but yet it’s March and I feel like spring should be here already. Enter frustration. It’s still cold and slightly rainy at times and it’s just easier to go home after work, watch TV and then go to bed. Enter complacent. I get home and I’m just bored. Bored with cooking, bored with the TV, bored with the routine of going out every weekend and doing the same thing. Enter uninterested.

As I sit trying to write this post about my homemade mac and cheese, I am feeling at a loss for words. Nothing extremely exciting is going on in my life currently and I feel like this frustration with winter has gotten the best of me. I really need a good kick of vitamin D, and soon, or I am afraid this mental block I have going on is going to be harder to kick than usual. My parents have been in Florida since January (I’m extremely jealous and miss them terribly) and I am hoping to visit them before the end of this month, so hopefully the Florida sunshine will give me that jolt of life I’ve been craving.

My Dad and cousin Michael in Florida…where I wish I was! 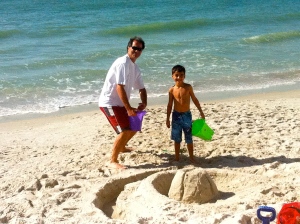 Speaking of cravings, I got home last night and for some reason could not shake the thought of eating mac and cheese for dinner. Not the kind from the box, but the gooey, cheesy, creamy homemade kind. I’ve never made this on my own before, as I really do enjoy the kind from the box, and I had no idea or recipe on how to make it from scratch. I had an idea in my mind of how this would go down, but I did some research before I took some ingredients from my fridge and made my own version of homemade mac and cheese.

I had high hopes at first, as the sauce was tasting amazing as it cooked on the stove, but then the kitchen disaster occurred. I had a feeling I should not have been in the kitchen last night, but I wanted mac and cheese and I was bored, so I had a kitchen adventure. So while doing my research I had read a tip to add some boiling pasta water to the sauce to make it creamier right before serving. Sure this is a great idea in theory, but it literally took all the flavor out of my sauce. I had to add in so much salt and pepper after I mixed the sauce with the pasta and I hate doing that. I always want my cooking to be so perfectly seasoned that there is no need for extra seasoning, but that was not the case last night. 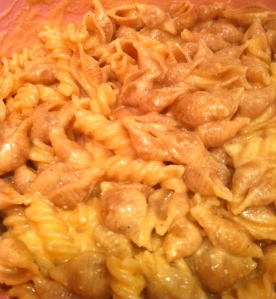 1 lb of shells or elbow macaroni

In a large pot bring salted water to a boil. Cook pasta for 8-10 minutes or until tender.

While the water is boiling, in a medium sauce pan, melt the butter. Once melted, slowly add in the flour and whisk continuously for 5-7 minutes. Make sure it does not get lumpy and do not burn. Once the flour and butter have turned into a thicker liquid, add in the egg (whisked), milk, cheese and then season with paprika, nutmeg, salt and pepper. 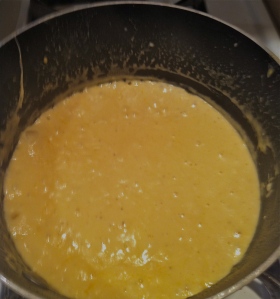 Stir continuously until creamy. If it turns out too thick, you may want to save a bit of the boiling pasta water and add in at the end, but be sure not to use too much or it will take out the flavor of the cheese sauce (a ladle full at most). Drain pasta and mix with cheese sauce and serve! 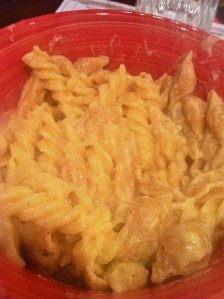 The recipe really didn’t turn out that bad, except for the extra water I added. Hopefully next time I can fix a few of my mistakes and make it even better! Unfortunately, I don’t think my family has a “family recipe” for this amazing thing called mac and cheese. It has been, and still is, one of my favorite things in the world. I lived off mac and cheese as a child and I am pretty sure I still could if I truly had no cares in the world! Oh, to be 5 again.
Lucia

2 thoughts on “Homemade Mac and Cheese”